The Cost of Being Mentally Tough 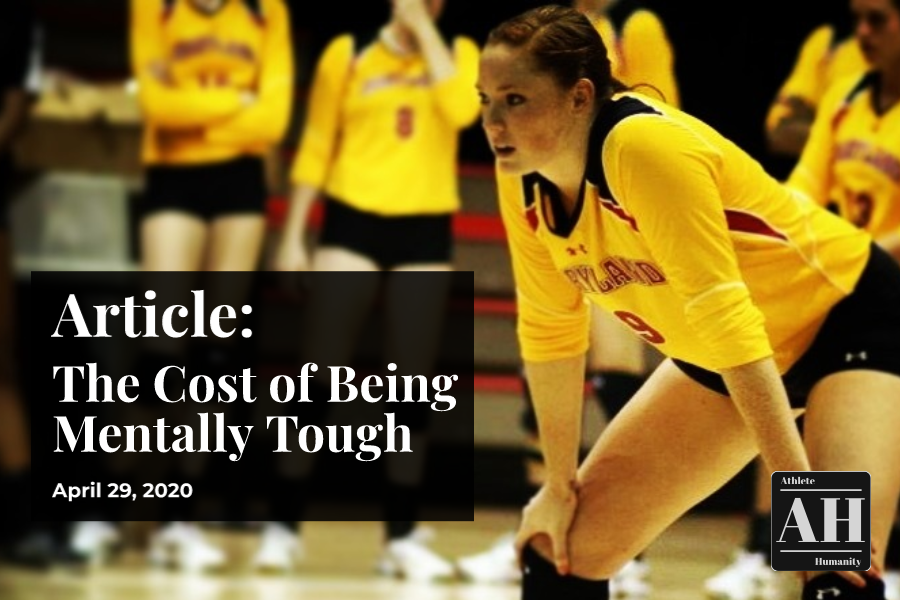 My volleyball career began back in 7th grade. At that time one of my sisters was a senior on the varsity team. I had been fortunate to have gone to her games over the years and had developed a small idea what volleyball was. My 7th grade year I played on our JV team and was able to watch and learn from the older girls- including my sister.

Fast forward to my freshman year in high school when I began playing club volleyball. I was lucky enough to play for an elite club volleyball program known as VolleyFX out of Rochester, New York. My freshman year of high school I played on the 17s team and then spent the next three years competing on the 18s team. Playing with older girls definitely helped me mature and grow on and off the court. It certainly had its challengesand added pressures at time but overall I am thankful. My club coaches ran a very disciplined team. I learned many incredible life lessons during those club years that I have carried forward with me. Looking back on my club experience I definitely believe my coaches integrated mental toughness into the way they ran things and into their expectations of their athletes.

However, it was not until college where I learned how destructive my personal understanding of mental toughness could be on my own mental well-being. After graduating high school I went on to play volleyball at The University of Maryland. In college my beliefs about what it took to be mentally tough became solidified. I learned tobelieve that the opposite of mental toughness was indeed mental weakness. I learned to believe that telling someone I was not ok would have caused disappointment in my coaches among others. I learned to believe that asking for help held a stigma that I was weak or less than, that I couldn’t handle it like every one else. While I now know those beliefs are wrong (and knew shortly after college), I was too afraid of the stigma. 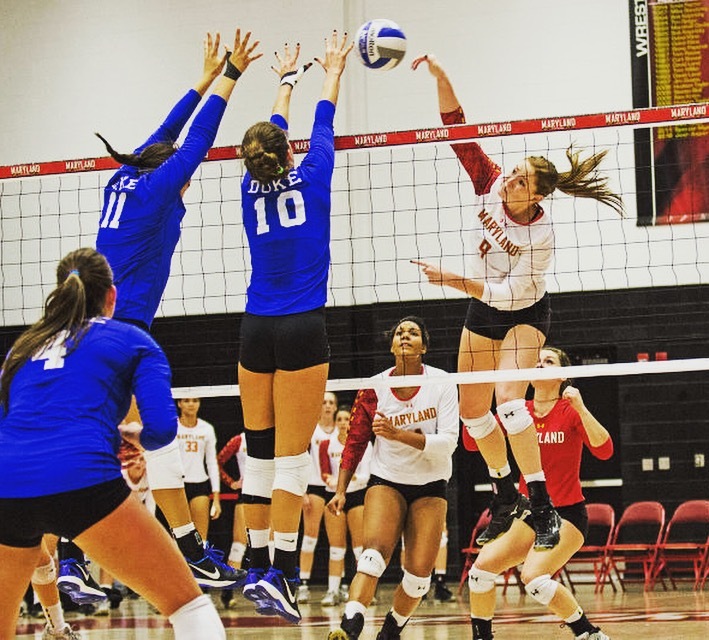 Let me stop here- as much as my college coaches kicked my ass at times, I do not blame them at all. I love my college coaches still to this day and have a lot of respect forthem. I blame the culture of competitive athletics at large and the lack of understanding and communication about mental health collectively.

After graduating from UMD, I went on to purse my Masters in Social Work. My final thesis was focused on Mental Toughness vs Mental Well being among collegiate athletes. I chose that topic for a reason- and with every thing going on in our world today I have had even more time to think about it all. Recently, I have thought about the many times my roommate/teammate and I joked as we carried bags and bags of groceries back to our apartment telling ourselves we had to make it in one trip, it was our “mental toughness” check....even if our arms or hands felt like they were going to break. I think about how often I told myself and sadly even others that “pain is just weakness of the mind”. (Disclaimer: I do still believe that you can talk your mind out of feeling some pain, BUT your mind is never weak for admitting something is wrong.)

For me, the volleyball gym had always been my sanctuary. It was a place where I could escape. I could laugh and compete with my teammates. I could sweat out any and all emotions I had bottled up. I was free- even if I was getting my ass kicked on the court. For me, volleyball was always a place I could clear my mind...until it wasn’t.

I had my first panic attack spring of my junior year. I was walking down the hall feeling blah about practice and as soon as I opened the door to the gym I felt like I was hit by a truck. I couldn’t breathe. I couldn’t talk. I felt overwhelmingly anxious, scared, and sad. I went directly to the bathroom and tried to catch a breath. I couldn’t. I cried. I began shaking. I had no idea how my sanctuary had turned into this. My teammate came in and helped me calm down. I honestly don’t even remember what happened after. I blacked out. I am sure I went back out to the gym and tried to practice like nothing ever happened. I had to be mentally tough remember. 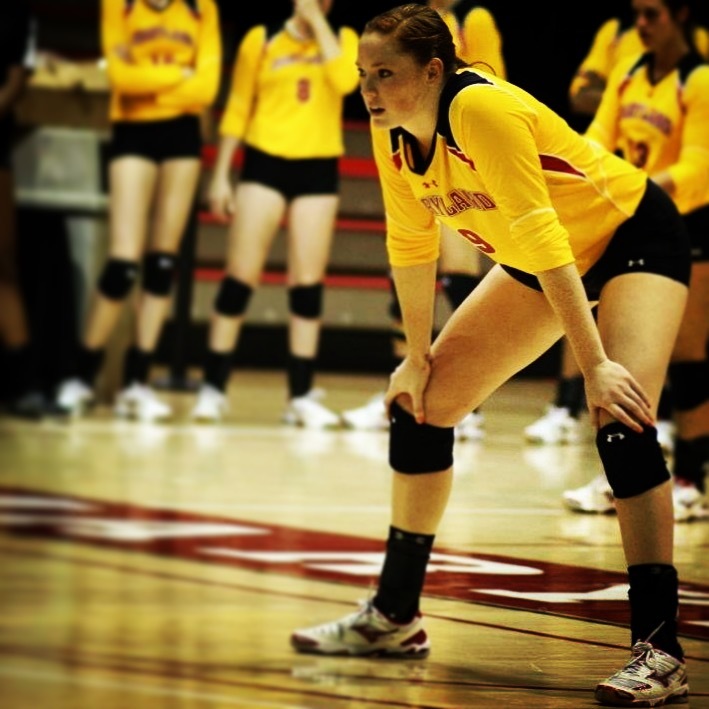 Looking back, I think I was struggling more during that spring season than I even realized at the time (or wanted to admit to myself). I wasn’t performing to the level I should have been. I was feeling burnt out, sad, tired, and angry. I wasn’t being a good teammate, leader, or player. But I barely shared any of that, any of how I was feeling. I am not sure I even had the energy to or cared enough to at that point. I deeply contemplated quitting and walking away from UMD. I just hated it. I felt like I was in this dark hole and I had no way out. I remember talking to my mom on the phone and telling her I was “over it”, telling her “I don’t want to do this anymore”. Like most moms would, she was very supportive and loving and encouraging but I just didn’t care. I had convinced myself my volleyball career was about to end. My mom sent me an email later that day expressing great concern for me. Telling me she had never heard me sound so discouraged and defeated. Again she sent love and words of encouragement but I could tell she was scared, as was I...

So what did I do? I continued to suffer in silence.

I really don’t know when my turning point was. I know I continued to chat with my mom/family and I shared a little with some of my teammates. I also had a strong relationship with one of my coaches and was able to lean on her during all of this. But I never reached out to formal resources during college...I was too afraid and ashamed. It would make it too real.

Although I was able to eventually dig my way out of the hole, at least mostly, I have to sadly say that I am not sure I ever loved volleyball like I had before. I was so afraid to open up and talk honestly about my mental health that I allowed the little black cloud to follow me till my college career ended.

The experience above is what ultimately inspired me to focus my thesis on mental health among collegiate athletes. It took until the early 2000s, when the NCAA student board identified mental health as a top concern among collegiate student-athletes, that some attention was shed towards the issue. In 2007, the NCAA published a handbook, titledManaging Student-Athletes’ Mental Health Issues.Although publishing a handbook was certainly a step in the right direction- if colleges and universities don’t integrate it into their sports programs what good is it? If college coaches continue to emphasize their expectation of mentally tough student-athletes how can we expect these same athletes to feel comfortable coming forward and speaking up when they need help? I promise you, as a competitive athlete, the worst feeling was disappointing coaches,teammates, etc. This is why the continued stigma around mental health is sucha concern of mine.

So here is my hope for current and future athletes- at all levels
• I want you to know you are worthy. You are worthy of speaking up and getting help
• I want you to know it takes great strength (not weakness) to admit something is wrong and you should be proud of yourself for doing so
• I promise you there are resources and people around you that will support you and lift you up...and that by speaking up you will in no way shape or form disappoint them
• I promise you- you deserve to enjoy your sport. We all play because we love it. Don’t let the stigma around mental health be the reason your love for your sport is taken away

Mental health issues are real. They are hard. But they can be overcome. Speak up. Break the silence. End the stigma.