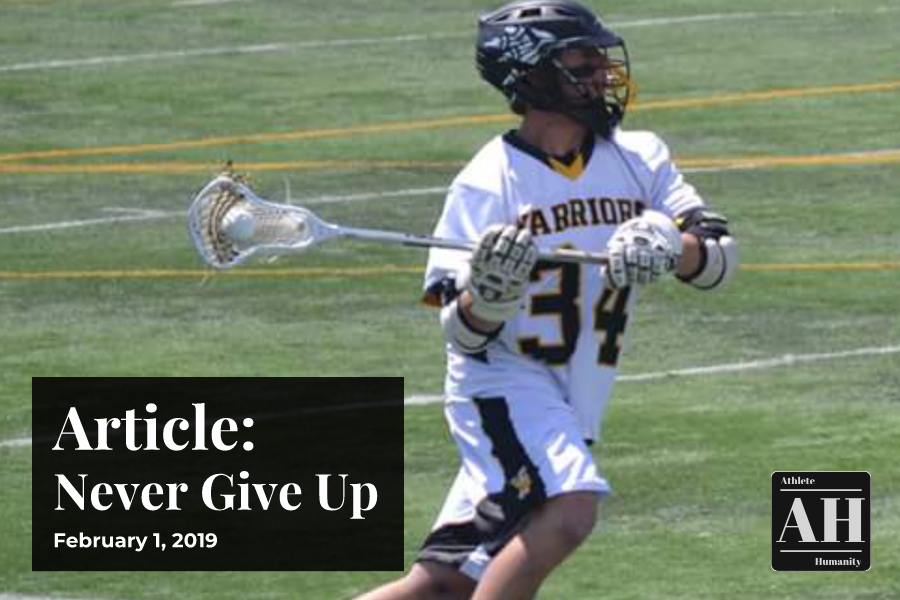 My story begins on September 11th, 2001, when my father was killed in the terrorist attacks. I was only 3 years old at the time, and I was too young to understand the meaning of that day. Throughout my process of growing up it started to hit me more and more that my dad was never going to walk through the front door, that I was going to grow up without a father, that I was never going to be able to have that father son bond in my life. I needed a way to connect to him, and to cope with the pain that I was feeling. Playing sports gave me an escape from everything. It was a way I could honor my dad, and something that would motivate me every day. It gave a purpose, and sports became my life. When I was on the field I felt like my dad was guiding me, and it was a way to make him proud. I was captain on my both football and lacrosse teams in high school. I had great success on the field, but deep down something was missing; something was just not right.

.College was when I first came to know the true meaning of depression. I played lacrosse at Hofstra University. In my freshman year, on the second day of practice, I hurt my knee and was out all of fall ball. I knew I would have work harder and faster to try and catch up with the others. However, this only perpetrated the beginning of my downfall. When I returned to practice I was not the same player. I was getting beat on defense, I was one of the slowest in sprints, and I felt like I became one of the worst players on the team. This big ball of negative feelings piled up in my head made up thoughts like, ‘you suck’, and ‘you will never be good again.’ The sense of excitement and happiness coming into my first year was all gone, and nothing but sadness and loneliness started to encapsulate me. My grades began to drop, and I felt like this was never going to end. I would not go out to parties or socialize with anyone, and I became last of the depth chart for my position. There would be times where I would pull my car over and start to cry. I started to get into trouble, and did not feel like myself at all. Instead of speaking out, I kept all these emotions to myself. I convinced myself to buy into the notion that this was just a phase, and that I would be fine. At the end of the season I went into my coach’s office for an end of the year meeting. That is where I told them everything that was going on inside of me. I told them I would try my best that summer to improve on the field and in the classroom.

That summer I worked my ass off to get in tip top shape, and to become a better lacrosse player. Yet, I still had this irresistible worry that nothing would change, and everything I experienced the year prior, would repeat itself.

Two weeks into my sophomore year I was called into the coach’s room. They sat me down and told me that they would be cutting me, and that they saw no improvement. I was in a complete state of shock, and tears almost began to drip down my face. I left the office, got in my car, and started crying. Everything that I worked for was taken from me in a split second. I felt like my coaches abandoned me and left me out to dry. It seemed like they set me up for failure. I felt embarrassed, ashamed, disappointed, sad, and my body was filled with anger. How could this happen to me? I was once someone whom was an important player on his high school teams, and in one brief meeting I had become a nobody.

I moved out of the college house I was living in, and moved back into the home I grew up in nearby. I would either sit in my room or in the basement most of my time. I started to skip class, and my grades began to drop again. For the times I would go out, I would drink so much hoping that I could forget all the negativity that was surrounding me. I would get into fights with my mom where she would begin to cry. I became a person that I did not know anymore. I knew I needed help, and after a long period of time, I finally convinced myself to go get it. I went to the doctors and was prescribed medication for my depression.

I transferred from Hofstra to Nassau Community College, where my grades began to improve. I started therapy to talk about everything that went wrong, and to have someone help me understand myself. However, I knew I needed to accomplish one more goal; and that was to play lacrosse again. I did not want to be known as a failure, and I knew I had something to prove.

I am currently a junior at Adelphi University where I am playing lacrosse again. I’ve made a lot changes in my life, and the first and foremost being to fight the sense of comfort we often find with isolation. Depression is funny thing, it continually makes you feel alone, yet we think the only way to get through it is through isolation. I have made a strong effort to put myself self out there, and it has been paying off. I have made a lot of friends quickly, and could not be happier with my decision to play lacrosse again.

We college athletes internalize our emotions that make us suffer on the field and in our everyday lives. It is okay to speak up and let someone know how you are actually feeling, and what is actually going on. You are never alone in this fight when it comes to dealing with mental illness. I am a first-hand victim when it comes to depression and dealing with the pain of silence. I could not be happier with finally talking about my illness because it has changed my life for the better!