It's Ok To Not Be Ok 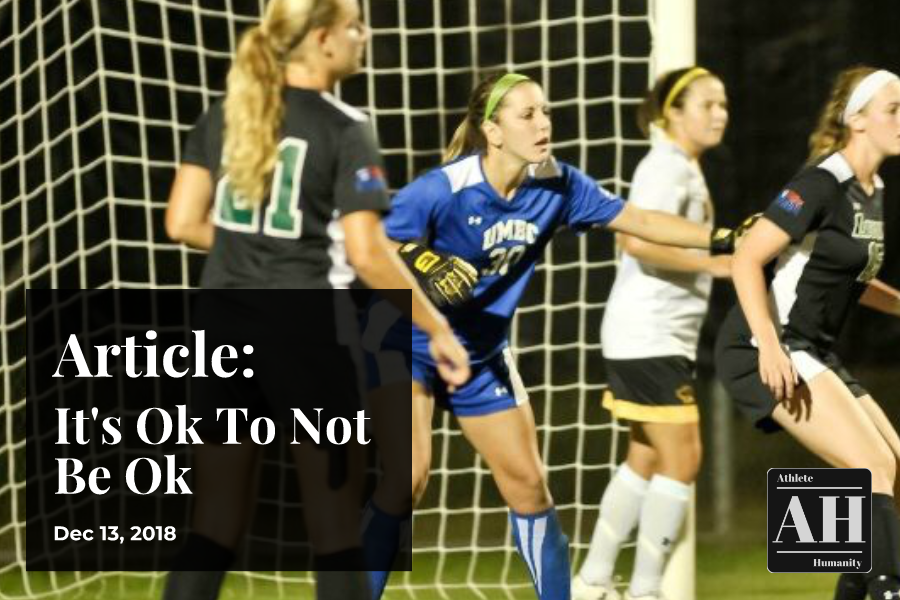 It's Ok To Not Be Ok

I was 10 years old when I can remember having my first panic attack. I was home alone one day after school and out of nowhere my thoughts started racing, my heart was pounding, and I felt like I couldn’t breathe. I remember calling my mom sobbing because I didn’t know what was happening; she rushed home to be with me and calm me down. Then, for about 2 weeks, I can remember having a panic attack almost every night before I went to sleep. I always thought that I was just emotional or maybe a little sad, but the concept of “anxiety” or “panic attacks” was something that I I just could not grasp at such a young age. From then on anxiety became a part of my normal, even though I had no idea what it was. I just thought that I was constantly stressed or emotional. It wasn’t until high school that I was able to actually identify with panic attacks and anxiety, but I still didn’t understand the impact that it was having on my life. To this day I’m not sure if that was because I didn’t want to accept that my feelings had a name or because I didn’t understand what was fully happening and what “anxiety” meant.

In high school, I admitted to myself and only myself that I suffered from anxiety and panic attacks. I was ashamed almost. High school is hard enough and all you want to do you is fit in. I felt that if anyone knew, they would think I was different. It was easier to let them think I was a homebody then to admit that I stayed home because I was suffering from a panic attack about being with others. I fought an internal battle for a few years. I knew my anxiety was there but I just tried to push it aside, and for the time being it worked well enough….and then I got to college. 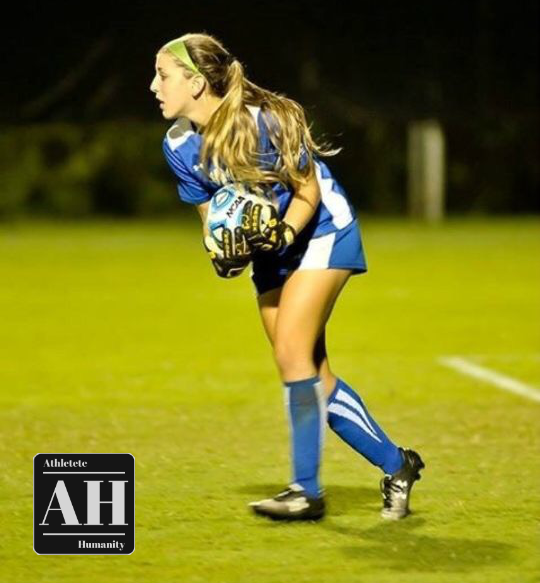 College was a whole different story. Even someone who has never experienced any sort of anxiety in their life, experiences anxiety in college. Freshman year was hard; I was away from my family, classes were hard, and there was the pressure of being a Division 1 athlete. My anxiety was at an all-time high and panic attacks were occurring almost daily and I had no idea how to stop them. I would call my parents sobbing, go into my coach’s office sobbing, and I didn't know what to do. I wasn’t sleeping because I was anxious, I wasn’t doing well in class because I was tired and i was living off coffee which just continued to fuel all of it. Both my parents and my coaches suggested that I try to see a therapist to talk through my anxiety and get help, but I refused. I thought that I could handle it on my own. So, I struggled through my freshman year with regular panic attacks, thinking that I’d get use to all the changes and that I would be ok... I wasn’t. 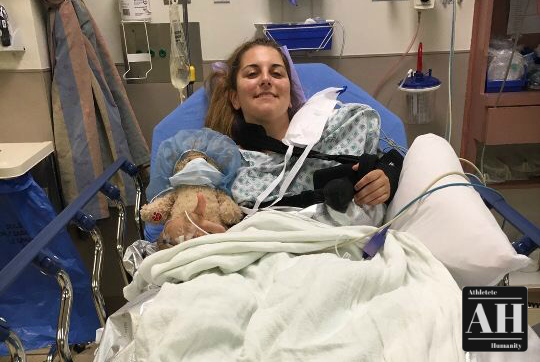 I tore my Rotator Cuff over the summer between Freshman and Sophomore year and put off surgery so that I could try to play my sophomore year. I pushed myself for that entire season, trying to play with an arm that just wouldn’t cooperate. I continued to struggle with all of it until November; the beginning of a 2 yearlong what I call “black whole” phase. Everything is a blur almost and it just seemed like one bad thing after another just piled on. My first surgery was on November 21, 2016. The surgery to repair the tear was successful but my recovery was way more difficult than expected. I had prepared myself for the surgery but no one had prepared me for the mental and emotional toll that major surgery can take on any one, let alone a college athlete. Any elite level athlete knows that even being out for a week with a minor injury is bad enough but when you’re out for 6 months after a reconstructive surgery and quite literally not able to do anything for yourself, is absolutely devastating. It was during this period that, for the first time in my life, I started to identify with depressive symptoms. I suddenly didn’t have any energy to do anything, I had no motivation, I wanted to stay in bed all day, I just didn’t feel myself. I went to my doctor to explain all of these things that I was feeling and that’s when she diagnosed me with depression. I heard the word and my head started to spin. That in itself was such a whirlwind. I thought I was such a happy go lucky person there was no way that I could have depression! After the diagnosis, we talked for a while, going over my options to see a therapist or try medication. I wanted no part of medication so I told her I would try therapy...but once again, I didn’t. I thought that I could handle it myself and that if I actually went I would have to admit to a stranger that I had a problem. I thought that if I just kept talking to my parents, and ate enough ice cream then these feelings would go away...and once again, they didn’t. 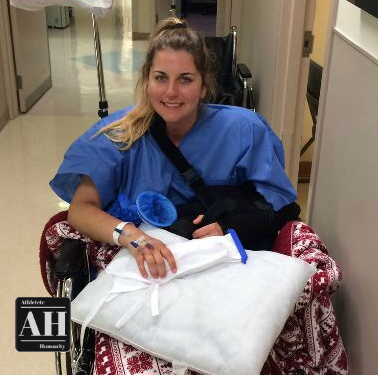 This went on for the next couple months after surgery and then the next blow came, 4 and a half months after my first surgery, after a fluke accident, I re-tore my rotator cuff. Back down into a deep dark spiral I went. This couldn’t be happening, I was a month and a half from being cleared and being back to playing and then I find out I would be out for about 9 more months. After finally starting to come back from the first surgery, I had it ripped out from under me once again. I felt like I had completely lost who I was. As an elite level athlete, you identify with being an athlete for your entire life. But when that is taken from you, you lose who you are. For the rest of this time I not only was trying to get through 2 surgeries but also trying to figure out who I am if I’m not able to play soccer. It was hard. Some days it felt impossible. While waiting for the second surgery there were days where I would wake up before going to practice, with a pit in my stomach because I knew that once again I would be sitting there watching my team doing what I could only dream of doing; playing soccer again. The next 9 or so months were hard, harder than I could have ever imagined. But once again, I tried to figure it all out on my own. I knew I wasn’t ok but I couldn’t bring myself to go get help, I thought I was “stronger than that”

I finally got “cleared” in December, they still kept me very limited on what I was able to do but hearing the words “you’re cleared” was a game changer for me mentally. Things felt like they were getting better, I felt like I got a little piece of myself back, I finally was starting to feel like me again. And then on January 3rd, 2018 my world came crashing down, once again. My dad, who is my best friend on this earth, called me that night and told me that he fell at work and after some test they found a 95% blockage in the main artery of his heart and he would be having open heart surgery early the next morning. This was by far the hardest thing that I’ve ever had to deal with, mentally and emotionally. The next few weeks following his surgery was the first time that I really realized that I couldn’t deal with my depression and anxiety on my own. Getting out of bed in the morning was a task. I couldn’t leave my house because every time I did, my anxiety got so bad that I felt as though I was going to pass out, and I couldn’t stay in my house because every time I would hear my dad make the slightest movement again I would start having a panic attack. I was in a constant state of anxiety; I literally could not function in day to day life. All I could really bring myself to do was sleep, because that was the only way that I could actually make my mind stop spinning. I was in the largest downward spiral that I have ever felt in my entire life. I went to a different doctor almost weekly for about a month and a half because my anxiety was tricking me into thinking something was wrong with me. I knew it was all my anxiety but my mind was quite literally telling me I was dying. I finally was prescribed medication. It took the edge off and allowed me to function. After about 3 weeks of living this way, I finally made my first counseling appointment. I was still completely against it, I didn’t want to talk about my problems and what I was going through but thankfully my mom forced me to go; and it was easily the best decision I’ve ever made. I was able to uncover so much about myself and that combined with the medication, made me feel “normal” for the first time in a very very long time. 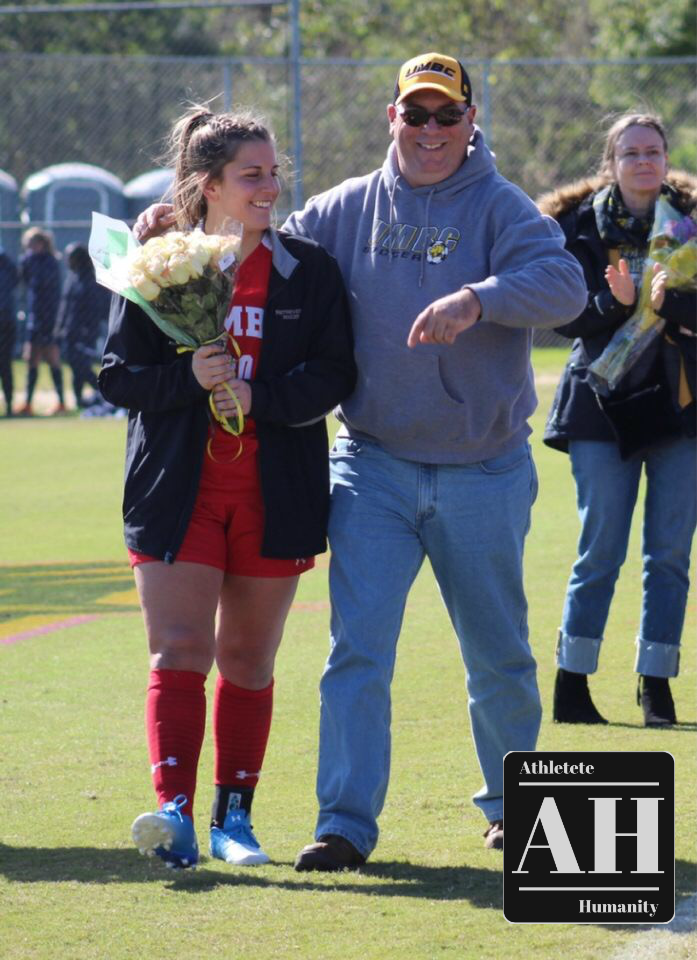 Through all of this; going for therapy once a week and taking medicine every day, I realized the stigma that there was around mental health and seeking help for any issues you may be having. Looking back I guess that’s why I pushed away treatment for so long. I would go to therapy once a week on campus, and quite literally sneak in the door so no one would see me, I would hide my medication in my room so none of my friends would see it. It wasn’t until after a couple weeks of this that I realized what I was doing. I loved treatment, I loved that it made me feel whole again, and there was absolutely nothing to be ashamed of. I’ve always been very passionate about mental health, but now that I was ok to say to anyone,” I have depression, I have anxiety, I take medication everyday, I see a counselor”. Healing is not at all linear. I still have my good and bad days, and I still have to work on myself and my mental health daily. Through this whole process I realized that it is totally okay to not be okay. I realized my passion for all things mental health and helping people break the stigma. I realized how much I want to help break the silence in the athletic community around mental health. Admitting you need help doesn’t make you weak, it doesn’t make you any less of an athlete, it doesn’t make anyone see you any different; it is okay to not be okay.